First, in keeping with NT preparation, note that the Harper-Collins Bible Dictionary is on $1.99 kindle sale.

Just as the Book of Ezekiel opened with a cryptic vision (1:1 “the heavens were opened, and I saw visions of God…, wheel within wheel”) so too does it close with one. The final eight chapters (40-48) constitute one long vision of a different sort than the first. Ezekiel is now fifty (the prescribed year of retirement for priests, according to Lev 4:3), and has spent half his life in Babylon, among a foreign language, culture, and religion. As a former priest, he is very familiar with temple and cosmological symbolism. He knows that the temple is a virtual mountain that one ascends to meet God, as mountains are the meeting place between heaven and earth, between mortal and immortal.

In the twenty-fifth year of our exile, the fourteenth year after the city had fallen, at the beginning of the year, the tenth day of the month — on that very day — the hand of the LORD came upon me, and He brought me there.- JPS

Although not explicitly stated, this is Yōm Kippūr (rhymes with “roam kipp-OOR”) or the Day of Atonement.* Several things take place uniquely on that day in the Israelite calendar. After various preparatory sacrifices for purification, two goats were brought forward, one “for ‘azazel” and one “for Yahweh.” Later in the ritual, the high priest lays his hands on the “goat for ‘azazel” to “confess over it all the iniquities and transgressions of the Israelites, whatever their sins, putting them on the head of the goat” (Lev 16:21 JPS) The Azazel-goat is then driven out and away from the temple.

One interpretation of Azazel breaks it into the words “goat that goes away” or “scapegoat” (KJV), but the most likely understanding is that Azazel was a quasi-divine demonic figure. Both the Jewish Study Bible and JPS Torah Commentary take this view. In some later Jewish traditions, the casting out of the Azazel-goat was understood as the model for “the eschatological casting into the abyss of the chief demon Asael.” (Eerdman’s Dictionary of Early Judaism, “Festivals and Holy Days”.)

To summarize (with later interpretation and some Christian/Mormon spin)- On the Day of Atonement, the high priest ritually undid the Fall, walking back into the presence of God in the holy of holies/garden/top of the mountain, past the real and symbolic guardian figures, by the blood of a slain animal “for Yahweh,” while Satan was cast out, ritually re-creating the world.** 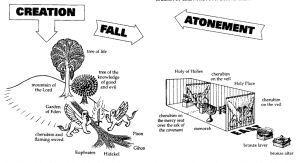 Image taken from Don Parry, “Garden of Eden as Prototype Sanctuary” in Temples of the Ancient World.

Now, Ezekiel was not the high priest. But on this Jubilee Day of Atonement, he is present in a visionary temple. The vision begins

In the twenty-fifth year of our exile, the fourteenth year after the city had fallen, at the beginning of the year, the tenth day of the month — on that very day — the hand of the LORD came upon me, and He brought me there. He brought me, in visions of God, to the Land of Israel, and He set me down on a very high mountain on which there seemed to be the outline of a city on the south. (Eze 40:1-2 JPS)

As noted earlier, temples were symbolically (and sometimes architecturally) mountains, elevated places between heaven and earth, and Ezekiel’s visionary location on a high mountain places him in a natural temple. Can we think of other major revelations or visions on mountains?

The last one, in particular, has connections to temple/cosmological symbolism. See “Sinai as Sanctuary and Mountain of God” by Don Parry, and, in general, John M. Lundquist, “What Is a Temple? A Preliminary Typology.” The anthology Temples of the Ancient World is a good collection of essays on the topic, available free at the Maxwell Institute.)

Ezekiel’s mountain/temple vision progresses; like Nephi’s and some other recorded visions, a heavenly tour guide accompanies Ezekiel to ask and answer questions. Ezekiel is given a tour of an idealized temple. Notably, it differs significantly from Solomon’s Temple, as well as the temple that would be built to replace it after the Jews return from Babylon.

“The temple vision can be interpreted as an extended metaphor reflecting an ideal of holiness and purity abandoned by Judah before the exile. In Ezekiel’s temple, the distinction between sacred and profane, clean and unclean, is perfectly maintained—and more strictly than with previous regulations.” Faithlife Study Bible.

(This is a free resource put out by Logos, an electronic publisher of scholarly books, with tagging and features much more powerful than Kindle. Many of the things I recommend and take snippets from are available there. The image below comes from the Faithlife Study Bible as well. The image is much higher res in the resource.)

Ezekiel 43-44
In these two chapters, Ezekiel is touring the visionary Temple, accompanied by his angelic tour guide. 43 opens with Ezekiel at the east gate, where “the glory of the Lord” enters into the temple, and then the alter and various aspects of the temple are described.

Two points here.
First, Ezekiel is at the beginning of a Jewish trend to avoid speaking of deity too directly. By the NT period, Jews will not say the name of God “Yahweh” except for the High Priest on the Day of Atonement. Some English-speaking Jews today will not even write or speak the word “God”, instead substituting G-d in writing and ha-shem or “The Name” when speaking. Matthew routinely substitutes “the kingdom of heaven” for “the kingdom of God” used in Mark and Luke. (If you hear a quote with “kingdom of heaven” you know it’s Matthew.)  So when Ezekiel describes “the glory of the Lord” entering the temple, he is speaking of God’s presence, just in a roundabout way. Note in his earlier vision, when he actually sees God himself, he refrains from saying it. He prefers to say that  (Eze 1:26-28) “seated above the likeness of a throne was something that seemed like a human form…. This was the appearance of the likeness of the glory of the LORD. ”

Second, it is highly significant that Ezekiel sees God reentering the Israelite temple through the eastern gate. Earlier, he had seen a vision of God leaving and abandoning the temple through the eastern gate (Eze 10:16-19). The significance here is this. Ancient Near Eastern peoples, including the Israelites, believed that a temple’s deity was ever-present in its temple. That presence assured the power, blessing, and continuing social/national functions carried out by the deity. (See my post here, at the bottom, talking about polytheism and functions.) For a deity to abandon her/his temple was like taking out the CPU of a computer, removing the engine from a car, assassinating the president of a company. It meant disaster, literally and figuratively:

“the theme of divine abandonment or the stories of gods forsaking their temples… is found already in Sumerian texts as an attempt to explain a city’s misfortune.”-ZIBBCOT.

So when Ezekiel sees Yahweh reenter this visionary temple, it is a sign of rebuilding, hope, and redemption to come, a sign that the future is bright and as it should be. The rest of 43 is just description of the temple.

Chapter 44 continues the description. The east gate is shut, so no one else can ever use it but God himself. (The king, who is rebranded as “the prince” throughout, is allowed to eat there, though.) In connection with the temple description, chapter 44 discusses the priests/levites and the problems they caused, and future changes to their service.

By the time we get to chapter 47, the whole of the temple complex and its workers have been described. We now move into discussion a cosmological function of the temple, which again draws on cosmological temple symbolism. If you read the paper above on “What is a Temple?” you know that as well as being associated with mountains, temples were also associated with the subterranean cosmic waters. As the temple and God’s presence bring blessing, fertility, and healing, these cosmic waters begin flowing out from the temple, and down to the Dead Sea, becoming quite a river. (Jerusalem is on a hill, and the temple at a high point on that hill. The Dead Sea, by contrast, is the lowest place on earth. Ezekiel describes these waters refilling and healing the Dead Sea, to the point that it becomes a fertile place for fishing. This, essentially, is like a re-creation. With the least-fertile part of the land healed, it’s an Eden. Ezekiel logically goes on to delineate the rest of the land of Israel, it’s borders and tribal assignments. We should probably read this as symbolic of the future renewal of the earth, not an actual event to happen.

That concludes our highly selective reading of Ezekiel.

* Leviticus 16 specifies that the Day of Atonement is on the 10th day of the 7th month, but Eze 40 says it’s the beginning of the year. How then is it Yom Kippur? I had to do some hunting on this. The year date tells us it is a Jubilee year, which happened every 50th year. The Jubilee year, which started a new year on the Day of Atonement, not at the end of the normal year. That, at least, is what the Oxford Bible Commentary and other resources tell me.

** This understanding of the high priest as the one who can pass by the guardian figures, both real/priestly and symbolic/cherubim (the tabernacle/temple was decorated with them) is represented in the Book of Mormon, but obscured by our modern chapter divisions (helpfully added by Orson Pratt in 1879.) Alma 12-13 were originally one section in the 1830 Book of Mormon, and presumably on the plates. The new Study Book of Mormon helpfully reinserts original divisions.

In Alma 12, Alma is asked, “What does the scripture mean, which saith that God placed cherubim (guardian figures) and a flaming sword on the east of the garden of Eden, lest our first parents should enter and partake of the fruit of the tree of life, and live forever? And thus we see that there was no possible chance that they should live forever.” Alma’s long and somewhat elliptical answer culminates in Alma 13 by talking about the high priest, who, as we have seen, could and did pass by the cherubim to bring atonement. We have tended to read Alma 13 outside of the context of Alma 12, as if it were simply a standalone General Conference talk on Melchizedek priesthood and/or premortal existence.

As always, you can help me pay my tuition here, or you can support my work through making your regular Amazon purchases through the Amazon links I post. You can also get updates by email whenever a post goes up (subscription box on the right). You can also follow Benjamin the Scribe on Facebook. If you friend me on Facebook, please drop me a note telling me you’re a reader.