Let’s start the new year by reminding ourselves how little we know, with a brief quiz. (That’s the grouchy academic in me, throwing a surprise pretest on the first day of class.)

1) Matthew, Mark, Luke, and John: which are apostles and which are not?

2) Describe the nativity according to Mark.  (HT: Ronan’s post.)

3) Which Gospel gives us the detail about the mean innkeeper, who turned away Joseph and Mary?

If you want to see more such questions, and the midterm and final I gave my BYU NT class, see my post and comments here.

1) Of the putative Gospel authors Matthew, Mark, Luke, and John, which are apostles and which are not?
Matthew and John are apostles. Mark (also known as John-Mark) was one of Paul’s mission companions, one Paul did not at all get along with. Luke, author of the 2-part Luke-Acts whole, was a physician, and apparently accompanied Paul on his trip to Rome. (The famous “we” passages in Acts.) Although ambiguous in the KJV, Luke explicitly indicates he was not an eyewitness to the events he reports, but has made diligent inquiry, Luke 1:1-4. As it turns out, the traditional attribution of the Gospels to these four is neither original, nor does it find strong scholarly support. LDS scholars as well have begun to write about this. (See here, for example.) As with the OT, traditional attributions of authorship tend to greatly simplify the reality behind the records, which often drew on preexisting oral traditions and other written records.

2) Describe the nativity according to Mark is a trick question, since Mark reports no nativity. This lack points to something interesting, illustrating the different and contrasting viewpoints and knowledge of the four evangelists. When we arrange the four Gospels in the order they were probably written in  (Mark first, then Matthew/Luke, then John last by a mile), we see an interesting pattern, implicitly responding to the question when is the most relevant time to begin the story of Jesus?

For Mark, the important and relevant stuff we need to know about Jesus only begins with his ministry, not his birth or childhood. Matthew, by contrast takes it back to Jesus’ birth, and Luke thinks its important to include the prophesied birth of John the Baptist as well. John says “nuh uh, if we’re going to talk about Jesus, we really need to go all the way back to The Beginning.” That is, John 1:1-18 adapts the language and motifs of Genesis 1  to teach that Jesus was divine, that he existed before he was born, implicate him in creation of the world, etc. John combines Genesis 1  with Greek and Jewish traditions of the Greek Logos, Aramaic memra’  (both meaning “Word” but with much broader connotations) and the Wisdom traditions. (See, for example, the essay in the Jewish Annotated New Testament called “Logos, a Jewish Word- John’s Prologue as Midrash.” Daniel Boyarin authored that and one of my other recommended books.)

3) Which Gospel gives us the detail about the mean innkeeper who turned away Joseph and Mary?

None of them, actually. Even though we’ve all seen him depicted, none of the gospels portray this. Tradition tells us about it, and we read that tradition right back into scripture. I wrote up a long post about the power of tradition to blind us.  It’s likely, in fact, that the “inn” was not even an inn, but an upper room serving as family guest room.

“The word can mean guest room, house or inn. It can be doubted whether there would have been an inn in Bethlehem in Jesus’ day since it was not on any major road, and inns normally were to be found only on major roads, especially the Roman ones… Furthermore, when Luke wants to speak of a commercial inn he uses pandocheion; 10:34 refers to an establishment found on the major road between Jerusalem and Jericho. Also, when Luke uses the word kataluma in his Gospel… it clearly does not mean an inn but a guest room….

It becomes more likely that by kataluma Luke means either house or guest room, and the latter translation must have the edge precisely because in the vast majority of ancient Near-Eastern peasant homes for which we have archaeological and literary evidence, the manger was within the home, not in some separate barn. The animals as well as the family slept within one large enclosed space that was divided so that usually the animals would be on a lower level, and the family would sleep on a raised dais.

In this particular case, we should probably envision Mary and Joseph staying in the home of relatives or friends, a home which was crowded due to the census being taken, a home where Luke tells us there was no longer any room in “the guest room” (noting the definite article before the noun). Consequently, Mary gave birth to her child perhaps in the family room and placed the baby in the stone manger. This means that a good deal of the popular conception of this scene has no basis in the text. In particular, the idea of Mary and Joseph being cast out from civilized accommodations and taking up temporary residence in a barn is probably based on a misunderstanding of the text.” Dictionary of Jesus and the Gospels, “Birth of Jesus,” emphasis mine.

I think he’s being a bit euphemistic in referring to the 1st floor animal area as the “family room,” but gets it right otherwise. Below is a very rough, roofless representation of one of these typical houses, with the animals hanging out in the pillared areas. A guest room would have been on a second floor, accessible by a stairway outside. (Some others on wikipedia and here. These are typical iron-age houses, but the general layout would have been the same in the NT period.) 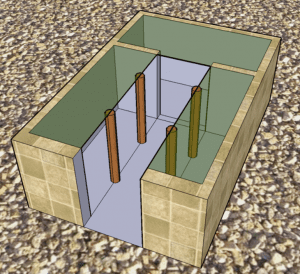 The point of all this, just to remind you, is not an architectural lesson, but an example of how tradition overpowers the actual words we’re reading. You can read one of the nativities in Matthew or Luke, and then turn around and talk about the mean innkeeper who isn’t there anywhere. This is a wake-up call to get a new translation, and read very carefully.

What is the JST?
In relation to the JST Luke 3:4-11 reading assignment, I’ll raise the question of what is the JST? Most people assume that the JST represents text that was lost or modified, but that is not the only or even dominant (in my view) option, as some very conservative LDS scholars have laid out.

How does the NT handle the OT?
Newer Bible translations make OT quotations and allusions obvious by setting them off through a special font, indentation, or other way,  but our KJV does not (even the footnotes miss some very important ones.) Consequently, many LDS do not realize just how frequently Jesus and the NT authors refer to the Old Testament, often in a foundational central way. Many of Jesus’ sayings such as “love thy neighbor” are not new, but OT citations. Indeed, one reference book that goes through the entire NT verse by verse, analyzing each allusion, runs nearly 1200 pages.

Once we’re aware of the frequency of these OT references, the next step is becoming aware of how they are used. The NT authors interpreted the OT using the same methods as everyone else at the time, in keeping with long Jewish tradition. In this method, context did not matter much, if it was acknowledged at all. We need to understand that this method was not unique to them, because it is otherwise very easy from a modern perspective which puts heavy emphasis on context and intent, to see the NT authors as playing fast-and-loose or “wresting the scriptures.” It’s essentially a case of 1st Nephi 19:23 and adaptation, but with more inherent claim of scriptural authority behind it.  This is not an insurmountable issue, but it’s one we need to be aware of (and probably one I’ve mentioned before.) I’m not aware of any in-depth LDS treatments, but it’s been handled multiple times and different ways in Protestantism and Catholicism.

Lastly, as always, you can support this site and my research by making Amazon purchases through this link. You can get updates by email whenever a post goes up (subscription box on the right).