Matthew and Luke provide us with two different but similar narratives, which are probably among the most familiar to any Christian. We typically combine these narratives together in our Christmas celebrations, art, creches, and cartoons, but they *are* different and separate. For example, Matthew talks about the visit of the wise men (not portrayed as visiting soon after the birth), but does not mention shepherds on the night of the birth.

Luke, on the other hand, talks about the angel visiting the shepherds, and the shepherds going to see the baby in the feeding trough (which is what a manger is), but Luke says nothing about a visit of the wise men.

I decided to go through both chapters and make a very rough outline to compare them. (Outlining is a great study skill when done with a little more depth. See the outlining chapter in Faulconer’s Scripture Study: Tools and Suggestions)

It is likely that the differences between these stories are due to different traditions circulating about Jesus, or different theological points to be made. Matthew, as is obvious, takes great pains to point out Old Testament passages that seem relevant to him. (Read Hosea 11 in entirety, verse 1 is quoted by Matthew as “out of Egypt have I called my son” and see how relevant it appears to your modern point of view.)

Remember that none of the disciples were there, and that the Gospels are based on written and oral sources, as Luke indicates in his opening verses. (Luke makes clear that he was not an eyewitness, but made diligent inquiries of those who were.) I don’t want to spend too much time on themes of “major differences between Gospels,” “historical problems” (of which there are definitely some problems. Eric Huntsman, a BYU NT professor, looks at some here), or “tradition has helped us misread this part of the NT” (which I already did for the Nativity here, a bit: there’s no inn and no mean innkeeper. Reread it.)

So, in my ignorance, I asked, which Herod is this? There are several Herods in the New Testament.

Herod the Great, who dies in 4BC, prompts Joseph’s return to Israel, according to Matthew. This Herod is the one who begins the project of greatly expanding the Jerusalem temple to appease the Jews. He himself was Jewish, kinda. This is the Herod of the Nativity, and we know all kinds of palace intrigue, poisonings, murders, marriages (Herod was married to 10 women at various times), plots, counterplots, multiple wills, contesting of wills, etc. were happening at this time in the royal family. Real soap opera/Game of Thrones type stuff.

Herod the Great quite rightly feared for his own life, and also feared the people that he oppressed would rise up against him. Consequently, he built little fortresses all over the place, “safe rooms” to flee to whenever he heard of an uprising. One was Herodion, set on a hill a few miles south of Jerusalem.

Herodion from above. (Public domain, wikipedia.)

Another was his palacious home/fortress atop Masada, with the three tiered balcony/bedroom/dining room overlooking the Dead Sea (much smaller today than it used to be.) 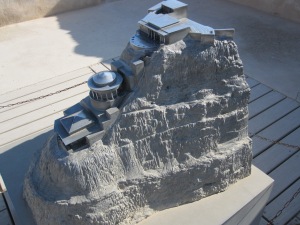 A model of Herod’s palace at Masada. (All these pics by me.)

Looking down from Masada

Looking back towards the entrance of one of the several cisterns on top of Masada.

From the entrance looking down into the cistern.

You can either walk the serpentine path up to the top… or be a lazy tourist and ride the tram. Take the tram.

some of the remaining decoration on the dining room level hanging off the side of the cliff.

At Herod’s death, his kingdom was divided between his sons.

Archelaus– son of Herod the Great, Archelaus rules in Samaria, Judea, and Idumea. Like his father, he’s pretty heavy-handed. You can get an idea of things from this excerpt of Dictionary of Jesus and the Gospels, “Herodian Dynasty”

Archelaus got off to a bad start. Even before he left for Rome to contest Herod’s final will he overreacted to an uprising in the Temple at Passover by sending in his troops and cavalry, killing about 3,000 pilgrims. While he was in Rome a revolt broke out again in Jerusalem at the feast of Pentecost, this time against Caesar’s procurator, Sabinus, and spread to Judea, Galilee and Perea. Archelaus’s brutal treatment of the Jews and the Samaritans… is in keeping with what Matthew tells of Joseph, who heard that Archelaus was ruling Judea and was afraid to go there. Being warned in a dream on his return from Egypt Joseph, Mary and Jesus went to live in Nazareth in Galilee (Mt 2:20–23). Soon after his return from Rome, Archelaus removed the high priest, Joazar, blaming him for siding with the rebels. He replaced him with Joazar’s brother, Eleazar, and later replaced Eleazar with Jesus, son of See. Around this same time Archelaus divorced Mariamne and married Glaphyra, daughter of King Archelaus of Cappadocia. She was the former wife of Alexander, Herod’s son and Archelaus’s half-brother. This was a transgression of ancestral law…. Either or both of these last two incidents may have caused the unrest that erupted. Archelaus used oppressive measures to quell the opposition.

As always, you can help me pay my tuition here. You can also get updates by email whenever a post goes up (subscription box on the right). You can also follow Benjamin the Scribe on Facebook.