Henry Eyring Sr. taught chemistry at the University of Utah, but also served on the general Sunday School board for the LDS Church from 1946 onwards. He frequently spoke about science and religion. 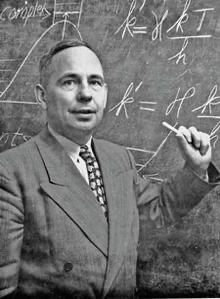 In March of 1952, he attended a 4-day “Religious Emphasis Week” at Oklahoma State, in Stillwater, at the suggestion of the First Presidency. Just in what capacity is unclear, but he sends back this report.

In accord with your advice, I attended the four-day “Religious Emphasis Week”…. I had twenty speaking assignments […including] three in our branch at Stillwater. I felt it was a fine opportunity to speak on Science and Religion as we understand it. Questions, such as those which arise through dating with radioactive carbon fourteen, pose many interesting questions to the thoughtful religious man. Altogether, I greatly enjoyed my experience and hope I did some good.

We admit our ignorance, and therefore would like you to explain in language which could be understood by our primary classes, just what is the question “which arises through dating with radioactive carbon fourteen.” We assume from your letter that the problem involved had some relation to the Church in its activity or doctrine, or whatnot. Please tell us.

Thank you for your kind letter… Accurate dating of events by radioactive elements decaying in the rocks and in textile fibers and elsewhere makes possible an accuracy in chronology which was undreamed of a generation ago. In effect, clocks are set going whenever these materials are laid down. These clocks can often be read with great accuracy. Such data, with many kinds of cross-checks, leads to an antiquity for life on this earth of at least some six hundred million years and an age of the earth upwards of two billion years. These conclusions are well known and will surprise no one.

Out near Wendover there are caves occupied by goats and men at a time when Lake Bonneville extended out that far. The manure and the charcoal from the fires indicate an antiquity of the goats and of the men of some 11,000 years.

My conception of the Gospel is that the scriptures record the dealings of God with His Prophets and His People. By living in accordance with their teachings, we may expect to reach the celestial kingdom.  To be understood, the Lord must reveal Himself in a language His Children understand. [Accommodation!] Of necessity, many things not necessary for their immediate progress are omitted, to be revealed later, and to be discovered by man’s own enterprise. There are some people who throw away the scriptures and restrict themselves to science and related fields. Others use the scriptures to the exclusion of other truths. Both are wrong. Latter-day Saints should seek after truth by all avenues with earnest humility. There is, of course, no conflict in the gospel since it embraces all truth. Undoubtedly, however, science is continuously challenging us to think through again our conceptions of the gospel. This should work both ways, of course.

Since I think we don’t accept Archbishop Ussher’s chronology as final, it seems to me of interest to check it against other available time scales. Such an investigation won’t affect fundamentals but it will help us as teachers.

If there are any further details which would be of interest to you, and should your busy schedule permit it, it would be a pleasure to supply any information I can, either by writing more or in person.

Some months later, due to “more urgent correspondence,” the First Presidency replied;

We are very grateful for your letter… regarding “dating with radioactive carbon.”…. We do thank you for your kind explanation.

Faithfully yours, THE FIRST PRESIDENCY

I’ve written more about Eyring in past posts:

As always, you can help me pay my tuition here via GoFundMe. You can get updates by email whenever a post goes up (subscription box below) and can also follow Benjamin the Scribe on Facebook.

2 thoughts on “Tales from the Archive: Henry Eyring Teaches the First Presidency about Carbon-14 Dating”