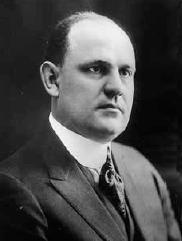 This post is a follow-up to my essay on the nature of nature of prophetic knowledge.  Although I’ve quoted Stephen L. Richards at length before, it turns out I’ve never posted this important excerpt.

Sustained as an Apostle in 1917, Richards wrote on occasion about science, religion, and General Authorities.  In this “Open Letter to College Students,” the lead article in The Improvement Era (June 1933), Richards expresses the view that although revelation to a prophet may reveal high truths of a progressive nature, a step or two beyond the prophet, that prophet will inevitably express said revelation in the language and forms he knows. In making this argument, Richards is trying to “fortify [the reader] against unwarranted doubt and agnosticism and perhaps encourage you to a more ardent and intelligent devotion to ideals you have long espoused.”

What if Hebrew prophets, conversant with only a small fraction of the surface of the earth, thinking and writing in terms of their own limited geography and tribal relations did interpret [God] in terms of a tribal king and so limit His personality and the laws of the universe under His control to the dominion with which they were familiar? Can any interpreter, even though he be inspired, present an interpretation and conception in terms other than those with which he has had experience and acquaintance? Even under the assumption that Divinity may manifest to the prophet higher and more exalted truths than he has ever before known and unfold to his spiritual eyes visions of the past, forecasts of the future and circumstances of the utmost novelty, how will the inspired man interpret? Manifestly, I think, in the language he knows and in the terms of expression with which his knowledge and experience have made him familiar. So is it not therefore ungenerous, unfair and unreasonable to impugn the validity and the whole worth of the Bible merely because of the limited knowledge of astronomy and geography that its writers possessed?-The Improvement Era 36:8 (June 1933), 451-453, 484-485.

In other words, Richards explains the apparent limitations of the Bible’s knowledge as a function of humanity; God speaks to the prophet, but the prophet will inevitably receive, conceive, and frame it within his own cognitive environment, his language and conceptions. So, God may well “speak down” to us and accommodate our state, but even otherwise, if a prophet were get the full stream, as it were, that human prophet will have to express revelation within human cognitive bounds. The end result, whether “direct revelation” or not, is that revelation, as spoken by prophets or recorded in scripture, gets filtered through human words, human concepts, human culture. This means that inspired revelation is, in some sense, a joint human-divine collaboration.

So, yes, Richards says, ancient Israelites thought the world was flat, and that’s not a problem once we understand the nature of revelation correctly. Richards is trying to make sense of the nature of revelation and prophets and scripture, what they know and how it is expressed. This, I think, we need more of. And I’ve seen some recently, looking at the various revelations of Joseph Smith. All of these, below, note how close study of these revelations shows how revelation is a joint human-divine process.

Benjamin Sommer similarly argues for a human “participatory theory of revelation” in a Jewish context, and Kenton Sparks in an Evangelical one, that scripture is God’s Word in Human Words. (I expanded on these ideas at the Joseph Smith Papers conference in October 2018, then further at the FAIRMormon Conference in 2019.) We should not be surprised when divine revelation has human fingerprints all over it, and speaks in a human voice, even with human limitations.

Returning to the article, Richards defends Darwin against the charge of “atheism” and invokes the science of Millikan and Einstein. Einstein you know, but Millikan, along with LDS scientist Harvey Fletcher, was responsible for the Oil-Drop experiment, which measured the charge of an electron and won him the 1923 Nobel Prize.

As always, you can help me pay my tuition here, or you can support my work through making your regular Amazon purchases through the Amazon links I post. You can also get updates by email whenever a post goes up (subscription box on the right). You can also follow Benjamin the Scribe on Facebook. If you friend me on Facebook, please drop me a note telling me you’re a reader. I tend not to accept friend requests from people I’m not acquainted with.

3 thoughts on “What Prophets Know: A Short Follow-up”