I was set to present a paper at the Mormon History Association this year (now pushed to next year), “Seventh-day Adventist Influence on LDS Creationism, from Joseph Fielding Smith to Ezra Taft Benson.”

Here’s an expanded teaser with some analysis of philosophical underpinnings.

I am not competent to discuss the theories of Geology as my knowledge of the subject is extremely limited.

Five years later, issues of science and scripture came to a head over B.H. Roberts manuscript The Way, The Truth, The Life. (See 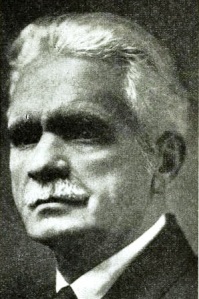 here for the history of the manuscript, here for the classic history of the controversy, and here to read the book yourself with some added essays.) Smith had clashed with Roberts and other Apostles several times over the relationship between, and interpretation of, both scripture and science. Smith was a young-earth creationist, Roberts was not.

Responding to a blunt public statement by Smith, Roberts in turn bluntly stated to the Quorum of the Twelve in writing that

If Elder Smith [was] merely putting forth his own position, I call in question his competency to utter such dogmatism either as a scholar or as an apostle. I am sure he is not competent to speak in such a manner from general learning or special research work on the subject; nor as an Apostle as in that case he would be in conflict with the plain implication of the scriptures, both ancient and modern

Smith responded by presenting his case to the Quorum in a 56-page paper. He asserted (I paraphrase and summarize here) that

Geology proves the earth is young, and therefore there were were no preadamites, and no evolution, and science thus proves scripture true.

In this paper, Smith repeatedly relies on “eminent geologist”

George McCready Price. A Seventh-day Adventist— and the father of modern young-earth creationism— Price did not actually have any formal training in geology. Indeed, James Talmage’s son Sterling, a PhD geologist, wrote to James in 1931 that re: Price’s 1923 book The New Geology

all of Price’s arguments, in principle at least, were advanced and refuted from fifty to a hundred years ago [see the “Scriptural Geologists” comment and references here]. They are not “New.” His ideas certainly are not “Geology.” With these two corrections, the title remains the best part of the book. 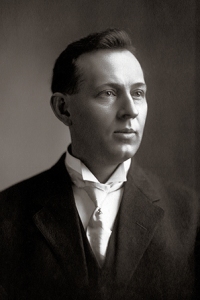 Smith in 1910 after Apostolic ordination. LDS.org

Smith read Price’s books, pushed them on fellow Apostles and lay LDS in personal letters. He also exchanged several letters with Price himself, trying to get geological ammunition against Talmage, who was, after all, a trained geologist. Apparently pleased with their exchange, Price later recommended Smith for membership in his Society for the Study of Deluge Geology, reserved for believers in a “literal six day creation” and seeking to prove that “the Deluge should be studied as the cause of the main geological changes since Creation.”

Smith’s only hesitation in joining Price’s group was that while he considered himself to “believe in a literal six day week,” they were six of “the Lord’s days as explained by Peter (1 Pet. 3:8)” i.e. 1000 years each. Since “the earth is passing now through a six day week of existence since the day of Adam, as outlined in the Book of Revelation,” that gives us Smith’s view of the age of the earth as roughly 6000 years of creation+ another few thousand since Adam.

Since then, some Latter-day Saints —including BYU professors, S&I employees, and Curriculum writers— have continued to cite the arguments of Price as made by his intellectual descendants: Seventh-day Adventists and fundamentalist Christians. The 1980 Old Testament Institute Manual (still current!) quotes roughly 2000 words from a Seventh-day Adventist creationism pamphlet (See the quote from Harold Coffin, here); that lengthy quotation cleared review and Correlation without any problems at all, either for length or content.

There is irony in the fact that Joseph Fielding Smith, who served on the first version of Correlation, a watchdog committee against “any worldly creep or philosophies brought in to the teachings of the church,” was the one to import and legitimize SDA fundamentalism into LDS thought.

Getting below the surface history here, there are at least two philosophical issues driving this conflict and adoption of SDA creationism.

One is, how do you recognize good science and distinguish it from bad science or pseudo-science? That’s a problem for philosophers of science, but also a very real issue at the non-specialist level. (We’re seeing it today with the pandemic.) Smith’s lone criterion for recognizing good science was “does it agree with (my interpretation of) scripture?” In Smith’s view, scripture consisted of divinely-revealed, correct, and unchangeable facts. Therefore, anything that disagreed with scripture (as Smith interpreted it) was wrong, regardless of the source, and certainly not science. Smith perceived his reliance on Price as defending God, prophets, and scripture.

On the other hand, trained scientists like Widtsoe and Talmage operated with much more sophisticated and experienced criteria for distinguishing good science from bad. They did not see Price as providing good science, nor did they see Smith’s interpretation of scripture as the only or best interpretation.

To be clear, Smith (and fundamentalists today) don’t “deny science” as much as hold to idiosyncratic and outdated ideas about what “science” is and does. They conceptualized “science” through the lens of Bacon and Scottish Common-Sense Realism, all self-evident facts with no hypotheses or “theories.”

Science simply doesn’t work that way, but that’s how it was thought to do so in the late 1800s. George Marsden writes that fundamentalists

The second issue is, how do we interpret scripture? That is, to what extent should information outside the text influence our understanding and interpretation of the text itself? Smith’s philosophy on that point was “virtually zero.” Smith thought scripture was an encyclopedia of divinely revealed and therefore correct, eternal, absolute, unchanging facts. As he wrote in Man, His Origin and Destiny

the testimony of the prophets are actual facts.

To the fundamentalist the Bible is essentially a collection of true and precise propositions.

More importantly, Smith argued that 1) scripture was intended for the common person, and so 2) the only thing necessary to understand scripture was sufficiently plain language. He often said things in public like

when the language is clear and there can be no misunderstanding of the meaning, we may with perfect safety rely upon the revelations of the Lord.

In private, he made comments such as this one in a 1962 letter.

I think I have perfect grounds for my views. If they are not correct then I cannot understand the plain language of the Son of God.

The problem with his “plain language” assumption about scripture and interpretation is that it doesn’t provide anything like a literal interpretation. “Plain language” reading doesn’t recognize the nature or situated-ness of scripture, the historical, cultural, and linguistic distance between the author (whether Moses, Moroni, Paul, or Joseph Smith) and the modern reader, i.e. that words change meaning, and that words alone without context do not convey meaning.

[K]nowledge of divine things had been given to human beings directly, unmediated and uncontaminated by the historical context in which it was received. This presupposed of course, that the biblical writers had been essentially ahistorical figures, enabled by the Holy Spirit to transcend their social and cultural settings in order to articulate truths of timeless and universal validity. This meant that revelation was subject to clarification but not real development. Indeed, the conviction that God’s self-revelation has not been significantly shaped by the particularities of time and place has been one of the most prominent features of conservative Protestant ideology from the 1920s to the present.

While Smith gave lip-service to the importance of context, in practice he denied its relevance to understanding scripture, particularly when it came to issues of creation, the age of the earth, etc.

And not surprisingly, Roberts, Widtsoe, and Talmage differed strongly on this point. Talmage, for example, cautioned several times that

we should be very careful in taking what we consider the one and only interpretation or application of a passage of scripture, and sweeping away as utterly wrong all accumulated knowledge that may seem to point to another interpretation.

Indeed, when Talmage wrote Jesus the Christ, he drew on  contextual and interpretive non-LDS scholarship available to him at the time. Nevertheless, it was Smith’s view of scriptural interpretation as requiring only “plain language” and not context, which came to dominate in Church materials.

BYU Prof Daniel Peterson demonstrated the continuing implementation of this “plain language” philosophy on the writing of Church manuals, from his own experience producing them. (My emphasis)

We were [writing for] the Old Testament one year and we wanted to put in some historical background. People can’t make sense of this if they don’t know what’s going on. I think a big aid to understanding Isaiah is to understand the politics of his day. Isaiah and Jeremiah were reacting to great power politics, and if you don’t know any of that, you can’t make any sense of it. A lot of it is talking about their day.

We tried to put some of that in and we were rebuked by someone, some nameless bureaucrat up in Salt Lake who said, ‘you’re just trying to show off.’ I thought ‘How? We’re anonymous. Who would know?’ We’re just trying to help people out there by saying, look: one paragraph.

And thus, the status quo.

For more on Price and his impact, I highly recommend

And of course, my syllabus on interpreting scripture, science, and creation.

As always, you can help me pay my tuition here, or you can support my work through making your regular Amazon purchases through the Amazon links I post. *I am an Amazon Affiliate, and receive a small percentage of purchases made through these links. You can also get updates by email whenever a post goes up (subscription box below). You can also follow Benjamin the Scribe on Facebook.